Day 16 – A picture of someone who inspires you.

So this guy has NO pictures of himself! This is crazy. I just flipped through every photo album we have from at least 2006 and there are none. This was the only one I could find. And I had to go on my mother’s facebook to get it. SO. I thought about putting one up of him and someone else, but then y’all would be all confused like “BUT WHICH PERSON IS IT?” and never mind. I just realized how retarded I am. No one had better show this to their older brother. (Yes that would be you, Tori. hahaha.)

ANYWAY. MOVING ON. my older brudder andrew. love him to death. but he’s moving out in 5 weeks and I don’t mean to like some apartment 3 miles away. I mean to Virginia. 9 and a half hours away. 😦 I’m going to miss him like super crazy. It makes me cry to think about it. sigh. and I won’t see him again until (wait for it) THANKSGIVING. HOW WHACK IS THAT. WHYYYYY?

okay, so this picture, as I said, is the only picture that exists of him and him only I swear. And figures it has to be this picture. Background on this picture? Yeah. He’s below a bridge in downtown Greenville at 11:45 p.m. on a Sunday night and it was POURING down rain. Like buckets of rain. you were drenched the second you were out in it. We went under the bridge when it started drizzling and figured we’d just wait until it stopped and then run back to the car and then it started pouring. So we decided to have a photo shoot. haha. so. that’s pretty much it. peace ❤ 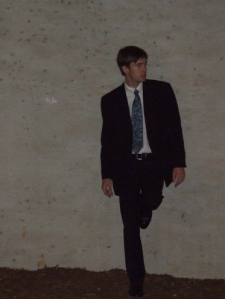 5 responses to “Day 16 – A picture of someone who inspires you.”